Since the opening of the Dogwood course in 1963, members and guests from all over the country have enjoyed the unique golf experience that CCNC provides. That experience is more than just the pleasure of playing an outstanding course in great condition. The natural beauty of the surroundings, the sense of playing through a quiet pine forest, the unhurried laid-back feel of the Club, and the warm hospitality of the members and staff all combine to make the golf experience one of the most memorable to be found anywhere.

Dogwood and Cardinal - The Gems of Private Golf in the Sandhills

Meandering up and down the rolling hills, through the long leaf pines, and around the picturesque lakes of CCNC are two exceptional and challenging golf courses. Both are perennially ranked high in the state by the North Carolina Golf Panel (2020 #5 and #17), and the highest ranked of all private, member-owned courses in the Sandhills.  Opening in 1963, the Dogwood Course (scorecard here) was originally designed by noted architects Ellis Maples and Willard Byrd.  In 2016, Kris Spence was brought in for a complete renovation, including a move to Champion Ultradwarf Bermudagrass greens and ultra-playable Zeon Zoysia fairways, the only zoysia course in the Sandhills (project website here).  The Cardinal Course (scorecard here) was designed by Willard Byrd and Robert Trent Jones, originally opening as a third nine in 1970 and completed with the final nine in 1981.  An Arthur Hills renovation was completed in 2001.  Including "hybrid" tees, both courses offer 10 sets of USGA rates tees, allowing for play from almost any preferred yardage course.

Early in its history, the CCNC Dogwood, and later the Cardinal, became known as outstanding tests of championship golf. CCNC has enjoyed a long, close relationship with the USGA, the Carolinas Golf Association, and the Southern Golf Association, hosting many of their great championships over the years. Victors at CCNC include the likes of Jack Nicklaus (U.S. Professional Match Play Championship), Ben Crenshaw (Southern Amateur), Hal Sutton (U.S. Amateur), and longtime CCNC member Webb Simpson (Southern Amateur). That legacy will continue with the 74th playing of the U.S. Junior Amateur Championship in July of 2021, the Club's third USGA national championship.

In tribute to Donald Ross’ great influence in the Pinehurst area, many areas of the club have taken on the name of his Scottish hometown of Dornoch.  The Dornoch Grille, Dornoch Villas, and Lake Dornoch to name a few.  Ross was the first golf professional at Royal Dornoch Golf Club, who’s Championship course is ranked #4 in the world (Golf Digest).  A close relationship between Royal Dornoch Golf Club and CCNC goes back decades, with a match between the two clubs played annually since 2011, alternating home and away.

An official reciprocal agreement now exists between Royal Dornoch Golf Club and CCNC, allowing members of either to play the other for no guest fees.  CCNC is the only club in the United States to have such an arrangement with Royal Dornoch, a relationship CCNC members enjoy and look forward to maintaining for years to come. 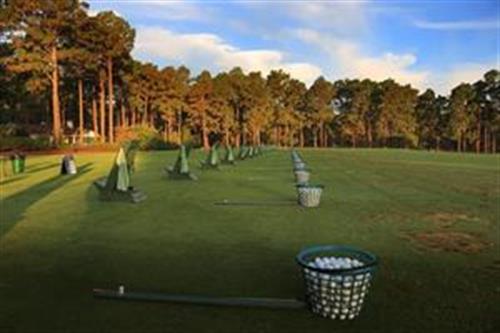 Whether a low or high handicap player, enjoy walking or riding, go for the pressure of a trophy event or the casual daily game, the perfect individual golf lifestyle can be found here. The organized Men’s and Ladies’ golf association play along with daily open games means members always have playing partners. The junior golf program is active as well, with group clinics and numerous tournaments throughout the golf season. For members who enjoy working on their game, the first-class practice facilities include two putting greens, two chipping/bunker greens and large range tee.

For additional information on all The Country Club of North Carolina has to offer please contact Membership Services at (910) 692-6565 or complete this form.